TeX-fold-mode is a minor mode which is part of AUCTEX, and automatically hides a lot of the latex formatting commands. For example, \alpha is rendered using an alpha character, and references are shortened to [r]. Here’s an example: 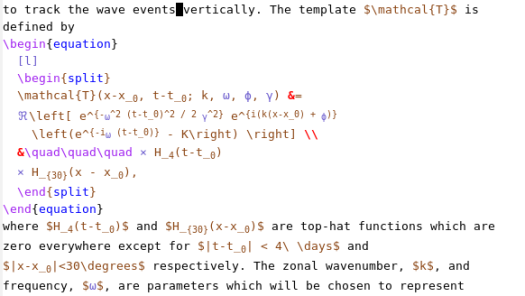 This gives a much cleaner feel when writing. Adding

to your .emacs will load the mode automatically and fold the whole buffer when you load a latex file. However, when typing, any new stuff won’t appear “folded”. To “re-fold” a paragraph, the command TeX-fold-paragraph must be used (shortcut C-c C-o C-p), which is a bit tedious.

Instead, it would be great if things would fold automatically. Calling TeX-fold-paragraph after every character insert event would slow emacs down to a crawl, so the approach that I use is to automatically call it when either $ or } are entered (typically ending an expression which should be folded). The code required for this adds a local hook which detects this change (the local part is important as we don’t want this hook applying to other buffers) is

This does not slow emacs down noticeably on my machine while keeping folding up to date. Typing a row of $ or } characters becomes very laggy but I don’t have to do that very often!